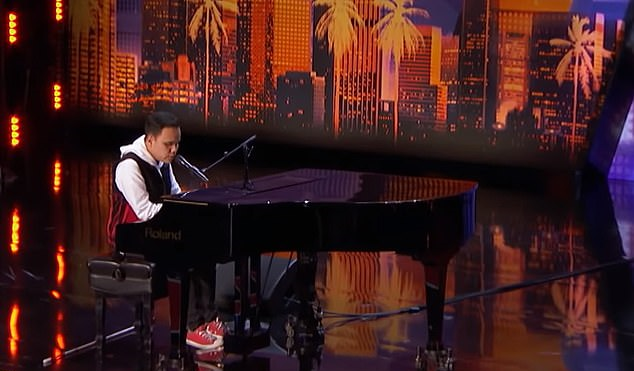 ‘He has no disabilities on stage’: Mother of blind autistic singer who left America’s Got Talent judges in TEARS calls him an ‘innocent soul’ who transforms when he performs music

A blind autistic singer who left America’s Got Talent judges in tears on Tuesday night is enjoying his overnight fame — and his mother couldn’t be more proud.

On the latest episode of the competition show this week, 22-year-old Kodi Lee from California stunned judges, audience members, and home viewers alike with his incredible rendition of Leon Russell’s A Song For You.

Speaking to NBC Nightly News the next day, his mother Tina Lee shared her awe at her son’s talent and the way performing transforms him, saying: ‘There’s this other part of him, it is like two people. You put him on stage and all of a sudden, it’s like the flip of hat, and he has no disabilities on stage.

Kodi seemed like an unlikely star when he took the stage on his mother’s arm in Tuesday night’s episode, with Tina doing most of the speaking when it came to answering the judges.

Simon Cowell looked wide-eyed, and Julianne Hough was wiping tears from her eyes before the song finished.

Kodi’s mom was also taken aback, even though she knew what her son could do.

‘I’ve been watching him perform for quite a while, but that day on stage, the sound as he started to sing, it was like the best sound I have ever heard come out of his mouth,’ she said on the NBC program.

‘Like, I was shocked. I literally could not stop crying. It’s almost like he knew that was the place to like, give it all.’He’d always say, “I want to perform for thousands of people.” And I’m like, Kodi, you’re performing for millions of people,’ she added.’He’s just such an innocent soul, and he’s so happy, always. And to be around him, it helps you be happy.’

Kodi, who sat beside her in the interview, also seems to be thrilled about the attention he’s getting.

‘I feel excited,’ he said, and when asked if he’s also anticipating the live shows coming up, he answered, ‘Heck yeah!’

Kodi’s appearance on the show has quickly become one of the must-see moments of the season.

He and his mother walked on stage together, with Kodi using a walking stick and his mom’s arm for guidance. Tina explained that her son developed a love of music, and an incredible singing talent, ‘very early on’ in his life. She also said that she knew he was ‘an entertainer’ from a young age.

‘We found out that he loved music really early on,’ she said. ‘He listened and his eyes just went huge. And he started singing, and that’s when I was in tears, because I realized he is an entertainer.

‘Through music and performing, he was able to withstand living in this world, because when you’re autistic, it’s really hard to do what everybody else does.

‘It has actually saved his life, playing music.’

According to Kodi’s official website, the talented 22-year-old was born with optic nerve hypoplasia, a congenital condition which means the optic nerve has not fully developed.

‘Born with optic nerve hypoplasia, surviving a life-saving surgery at five days old, and being diagnosed with autism at an early age has never stopped Kodi from reaching for his dreams,’ his online biography states.

‘Kodi continues to pursue his musical career and his dream is to be a “rock star” performing for thousands of fans.

‘Any opportunity Kodi has to perform is a good day for him, and the bigger more energetic the audience, the more he loves to shine.’

After telling the judges that he was going to ‘sing a song for you,’ an excited Kodi then sat down at the piano, where he received a quick pep talk from his mother before she left him on the stage to perform.

While she watched on, Kodi proceeded to perform a spine-tingling rendition of Leon Russell’s A Song For You, a hit that has been tackled by some of the world’s greatest singers, including Michael Buble and Elton John.

As he finished his 40-second-long performance, the entire room got to its feet, giving Kodi a very well-deserved standing ovation. Both Julianne and Gabrielle were seen wiping away tears as well.

‘I can’t stop crying!’ Julianne admitted, while Howie told Kodi: ‘I will tell you that all four judges and everybody in this room were up on their feet. You were wonderful.

‘Not only do we feel the authenticity of what you do, but you are a great inspiration and a great talent, and it was amazing.’

‘I know everybody needs a voice and an expression, and I really feel your heart, your passion,’ Julianne added. ‘Your voice blew all of us away. I just want to say that I heard you and I felt you and that was beautiful.’

A stunned Simon was also blown away by the performance, telling Kodi and his mother: ‘What just happened there was extraordinary. Really extraordinary.

‘I don’t know what it’s like to live in Kodi’s world — all I can tell is that you obviously have an amazing relationship, the two of you. And your voice is absolutely fantastic. You have a really beautiful tone. ‘Thank you so much for trusting us on this show. I’m going to remember this moment for the rest of my life.’  Gabrielle then concluded the judges’ comments, saying: ‘I’m a new judge this season, and I’m also a new mom this year. It’s the toughest job I have ever had, and the most rewarding job I have ever had. You just want to give your kids the moon, the stars, and the rainbows, and tonight I’m going to give you something special.’

The 46-year-old then hit the golden buzzer, sending Kodi straight through to the live shows, and leaving Kodi and his elated family in tears.

Drawing Kodi into a warm hug, Simon told him: ‘This is Simon. I’m so proud of you. That was quite amazing.’

‘You just changed the world,’ Gabrielle added, while hugging the rest of Kodi’s family, including his mother, his brother Derek, and his sister Kayla.

Taking to Instagram, Kodi’s younger brother Derek shared a touching tribute to his sibling in honor of his America’s Got Talent performance, writing: ‘Congratulations @kodileerocks!!

‘You are the best big brother anyone could ever ask for, you’ve inspired me, been my role model throughout my life, and made me realize that through passion and love you can get through anything!! ‘Your voice has been heard and it’s a dream come true for all of us, I love you Kodi.’And it wasn’t just those in the theater that were left in awe of Kodi’s talents – social media was also flooded with posts from stunned viewers praising the 22-year-old’s incredible abilities, including Oprah Winfrey.

‘Loved this moment so much!’ she wrote ‘Stood up and cheered in my living room.’Others readily confessed that they were left in floods of tears after Kodi’s performance, with one person writing: ‘I cried and also felt his beautiful energy!’

‘I predict you may have the WINNER right here!’ another added. ‘What an amazingly talented young man. When he sang I teared up and had chills! Simply awesome!’

‘This was the best thing I’ve watched in a very long time. Amazing,’ one man then chimed in.

Others praised Kodi’s mother Tina for her clear devotion to her son, with one person tweeting: ‘The greatest applause goes to Mom, her love, care and support is what we’ve just been able to witness.’

Another woman wrote: ‘As a mother of two kids on the spectrum my heart was filled with joy. To see him enjoy music so much that the stimulation doesn’t discourage him from doing what he loves.’

According to Kodi’s website, the talented singer is just one of 25 musical prodigious savants in the world who possess his kind of ‘extraordinary abilities,’ which include perfect pitch and an audio photographic memory. Prodigious savants are people living with severe mental disabilities who have been diagnosed with a condition known as savant syndrome, and are often also autistic. Despite their disabilities, they possess extraordinary abilities and talents in a specific field, be it art, math, science, or — as in Kodi’s case — music.

‘Kodi’s amazing gift lies within his musical expression, perfect pitch, and passion for all forms of music,’ his website says.

‘Kodi has an audio photographic memory, in which he can recall music he hears after just one listen. An unbelievable gift in itself, but his musical expression and prowess top even that.’

The website also hints at the fact that Kodi may change up his style of music ahead of his next performance, with his biography revealing that his repertoire includes all kinds of genres — as well as tap dance.

‘His musical repertoire ranges from rock to jazz, to R & B, and pop,’ the site explains. ‘Plus his mastery of the classics such as Bach, Chopin, Mozart and the list goes on.

‘He literally has a library of songs in his mind that would rival any jukebox. But he doesn’t stop there. He recently has picked up tap dancing and he continues to amaze with his musical expression through dance and vocalization.’

Although Kodi’s performance on America’s Got Talent was no doubt the most widely-viewed, it is certainly not the first major stage he has stepped onto, with his website revealing that the talented musician regularly performs at local venues in California, and has also been invited to perform at Carnegie Hall in New York City.

PrevPreviousSingapore is small. For single mothers, it’s even smaller.
NextFor Nur, the divorce was his second chance at being a father again.Next
Scroll to Top