For Nur, the divorce was his second chance at being a father again. 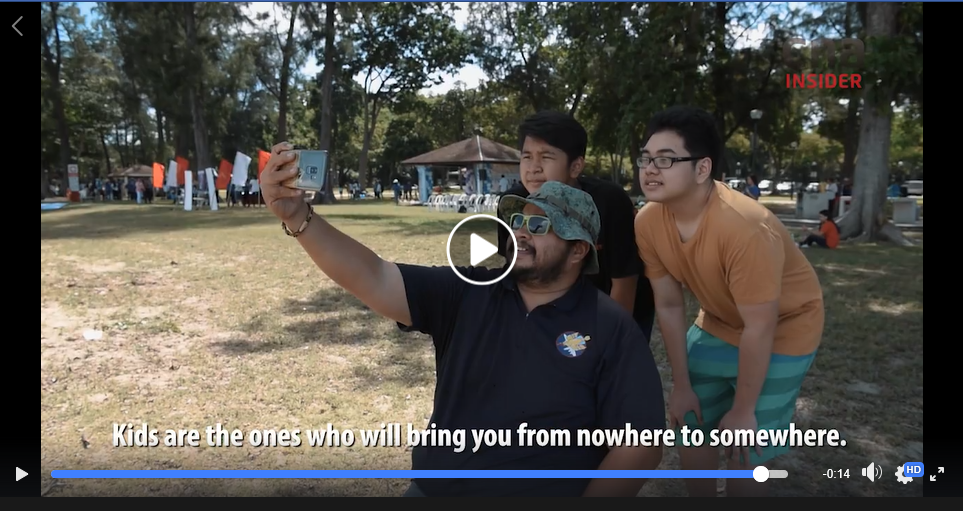 Grit and a whole lot of love: When single fathers rise to the challenge

One parent rediscovers what it is to truly be a father after a traumatic divorce, another has been raising his daughter since she was one — two dads share their stories of solo parenting.

SINGAPORE: For two years now, the master bedroom in their four-room flat has remained largely untouched. No one sleeps there any more.

Mohd Nur Azmi sometimes goes inside to be alone, but he feels too “uneasy” to sleep there. So he sleeps with his teenage sons, who joined their beds to accommodate him. That gives him a sense of comfort.“I told them I’m so used to hugging someone when I sleep,” the single father says candidly.

His boys have grown used to it, even though the younger one dislikes being hugged in his sleep. “So I ask him to hug my brother,” says 15-year-old Syafiez. And the elder sibling does not mind.

Their father has always hugged them since they were little, but things were a lot different then, not least because he was not home much.

He was a heavy vehicle driver for 13 years and used to work until late at night. And when he had time off, he was often away spending it on his favourite hobby: Fishing.

“We couldn’t get close to him,” recalls Syafiez. Everything changed, however, when their parents’ marriage hit the skids.

Nur’s divorce in 2017 was the lowest point in his life. But it was when he became a single parent, after being awarded care and control of his sons, that he rediscovered what it meant to truly be a father.

In his case, not only has he grown closer to his sons, they have also been his pillars of support. “These two guys are the main reason I stay strong,” he says. “Without them, I might be going crazy.”

BUILDING UP THE BONDS

When they were younger, his sons may not have seen as much of him as they do now, but to them he was always a “caring father”. As Syafiez says, “He’s the one who always cheered us up.”

And as he was the sole breadwinner, not earning much, they understood why he worked long hours.

“He has to support the family,” says Sofyan. “He knows how much … he had to work to cover our expenses every month. I understand him.”

Nur still works hard, spending up to 16 hours a day on the road during the week, but now as a private-hire car driver.

In fact, after going to bed with his sons, he is up in two hours to drive the night shift. When he returns home, there is little time to recharge, for he must be up as they get ready for school.

“People say my kids are … big boys — they can take care of themselves,” he says. “I say no. Whatever it is, I have to … spend time with them.

“Now (it’s) just the three of us. If anything were to happen to my sons, I can’t forgive myself.”

So he sends the younger one to school and picks him up in the afternoon. He would do the same for Sofyan, except that the latter usually wants some “personal time” on the bus and with his friends.

Nur switched jobs precisely to have more time and flexibility to be with his children. And joining a ride-hailing platform “is like (being) your own boss”.

“I loved driving the big trucks but … I didn’t have spare time,” he says. “If I wanted to … see my kids for a while, (it) would’ve been so troublesome.”

In the case of 44-year-old Eric Kwek, ensuring that he did not miss any milestones in his daughter Kylie’s life has been especially important.

“The important ones I told myself (were) the first day of school, her graduation … her birthday,” says the divorcee. “I put everything aside just to be with her.”

Kylie’s first day in kindergarten, for example, was a “dramatic” experience, as she was “crying all the way”.

“Even though I left the school, my mind was … wondering if she was okay — whether she was crying or not,” he recalls. “In fact, I kept coming back to peep through the windows, although they were fully shut.”

After the first few days, things got better and then “she liked going to school”.

His divorce in 2011, when Kylie was just a year old, landed him in uncertainty as a first-time father.

Nur, on the other hand, had been married for 15 years when he finalised his divorce. And the process took a toll on his state of mind and health.

“I tried to save my marriage … I begged, because I didn’t want to see a broken family,” he recounts.

And his ex-wife’s words in response — “I see no future in you; you can’t even afford to buy your sons’ school books” — still “play in (his) mind”.

He admits that “money was always the problem” in their marriage because he had no savings when they got married, and his salary as a heavy vehicle driver was low.

At the divorce proceedings, the court heard from his sons and awarded joint custody, with the order that they should live with him.

He had no idea what the court’s ruling would be, but “even my ex-wife knew I loved my kids so much”, he tells CNA Insider.

The hard work, however, had only just begun. There were household chores to do, which his ex-wife used to do. There were the meals he had to get for his sons. And there were school matters to be sorted.

It was a new situation for him, but he did not flinch from these tasks. Slowly but surely, he found his footing as a hands-on parent. And he is earning more too.

The challenge of being a single father can manifest in different ways. It can be literally as simple as not knowing how to tie a daughter’s hair other than in a simple knot, as Kwek discovered.

Or as he is experiencing now as Kylie grows older, she has “begun to voice what she wants”, instead of “just listening to Daddy and the helper”.

At the same time, “she wants to follow me everywhere I go”, says the property agent. And while that is not possible, he understands why, “when she’s going through such a childhood”.

“I need to give her a lot of assurance that she isn’t alone,” he notes.

WHAT THEY MUST COPE WITH

He knows, however, that he is one of the fortunate ones — so far.

Lakeside Family Services executive director Teo Tee Loon has seen fathers who “aren’t able to cope with the strain” and who “may leave the children to the care of their relatives or domestic helpers, while they focus on their breadwinner role”.

“Generally, single fathers also have to learn how to meet the emotional needs of children,” says Teo. “Children may need answers to very difficult questions like, ‘Why can’t you and mummy live together any more?’

“In particular, many single fathers aren’t equipped to cope with the needs of teenage daughters. We had a case of a widowed father who faced challenges relating to his teenage daughter when she went through puberty.”

The proportion of single-parent households in Singapore has remained fairly stable, at around 7 per cent of all resident households between 2000 and 2017, according to the Social and Family Development Ministry.

And of these single-parent households — be they a divorced/separated, widowed or never-married parent — about one in five were headed by males in what has remained a fairly consistent trend throughout that period.

Though single fathers are the minority, Teo also highlights that his professionals have seen “many single fathers who are committed to bringing up their children”.

Kwek took his inspiration from his father, a widower who single-handedly raised three children since he was two.

“(My father) wasn’t highly educated. He was a driver, he worked hard for the family, and this was something I learned from him,” says the proud son. “Anything I want to I do, I’ll always work hard.”

His father still lives with him. In contrast, Nur’s immediate family relocated overseas before his life took a drastic turn.

His brother resides in China, while his parents and sister live in the United States, where his 62-year-old mother, Saadiah Harun, runs a small food business in Massachusetts.

The decision not to return home was a difficult one for Saadiah to take, but she “trusted he could handle everything on his own”. Her faith was not misplaced, but Nur had to first get through his emotional distress.

And that is a common challenge for single fathers, notes George Yeo, executive director of the Thye Hua Kwan Centre for Family Harmony @ Commonwealth.

“Divorcing fathers go through a grieving process and may need support to adjust well,” he says. “Informal support from friends and families, as well as professional counselling, plays an important part for such fathers.”

Ultimately, Nur’s children were instrumental in his healing process. And their intervention on the day of the divorce marked the turning point.

Before that, their usually happy-go-lucky father was not mixing with people because he was “always desperate to go home” to win their mother back. Their heavy-set dad also lost his appetite — and 30 to 40 kilogrammes.

On the way to sign the papers, he asked them: “Can Papa try again?”

Sofyan’s reply was imprinted on his memory. “My elder one said, ‘Papa, she doesn’t love you any more. So what’s the point of you pressuring her to come back?’” he recounts. “My son said, ‘Pa, please proceed (with the divorce).’”

The three of them have since “become better”, says Syafiez. “I don’t get complaints from my mother any more. So my father is more peaceful. He gets to work peacefully.”

The boys also pitch in with the housework, especially when their father is tired. And for all they have done, he says gratefully: “They give me the moral support (that has) stayed with me … My two sons make me stronger.”

They now spend many of their weekends fishing at the beach — a pastime he stopped engaging in shortly after his divorce until that passion was rekindled with his sons’ support.

“Some people say fishing is a waste of time. But people who like fishing know how it feels,” he muses.

“Fishing is one of the best times (to) relax, with the wind, the sand … the beautiful sky, and then you have time to just talk to your kids.”

His sons know the beach is still his favourite place. “We go fishing with him to make him happy and … not feel alone,” says Syafiez. “We have our time together.”

And for Father’s Day today, Sofyan promises to give his dad “the best fishing experience” in the next few years, “whether it’s the location or the equipment that he uses”. He adds: “I just want him to keep thinking forward.”

Syafiez agrees. “In 10 years’ time, we hope to be succeeding in life and helping each other,” he says. “The only thing we want is to make our family happy and proud.”

PrevPreviousKodi Lee has an unbelievably inspiring story you need to hear as he sings A Song For You
NextBeing a Single Father: Nothing Prepares You for Never Feeling Good EnoughNext
Scroll to Top