Did you know persons with autism can learn through autism-friendly teaching methods! 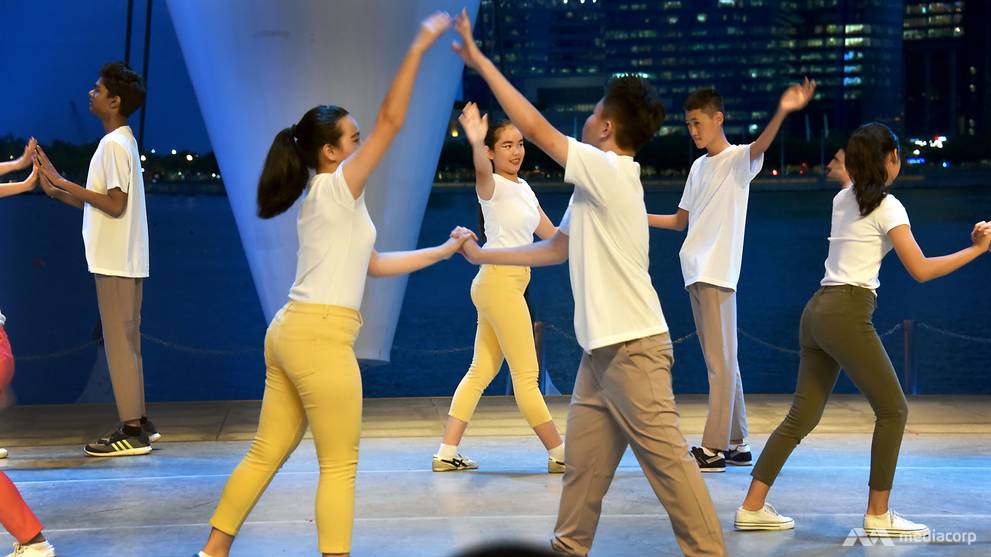 Did you know persons with autism can learn through autism-friendly teaching methods?

For Jovan Tan, a student from St Andrew’s Autism School, a simple dance collaboration with his partner from Boon Lay Secondary School resulted in much newfound confidence for him! The pair, along with others who performed at the 2018 Singapore Youth Festival – SYF, is a testament to the fact that everyone can participate in the Arts.

Best foot forward: How a simple dance performance changed these students with autism

Students from St Andrew’s Autism School collaborated with Boon Lay Secondary School for a dance performance that made them more confident to put their best foot forward. But their mainstream peers also opened up their hearts and minds to accept those who may be different.

SINGAPORE: Dressed in a myriad of glittering costumes, the students moved energetically, yet gracefully to the strains of the upbeat music.

It was a whirl of activity at the Esplanade outdoor theatre, as students from various schools around Singapore showcased the best of their dance abilities at a special Singapore Youth Festival celebration performance held late last month. Set against the backdrop of the Singapore River and the twinkling city lights, it was a true visual spectacle.

But one item stood out. Not for its elaborate costumes, as the dancers were simply dressed in white tops and brightly coloured denim jeans. It was also not for the complexity of the moves or their intricate footwork, for the moves were simple, and easily executed.

But it was the awareness that the students on stage had overcome many obstacles to get to where they were that made members of the audience whip out their mobile phones and cameras, and cheer loudly for the performers.

It was a dance improvisation piece titled ‘Connectivity’, the result of a collaboration between Boon Lay Secondary School and St Andrew’s Autism School (SAAS), a special education school for those diagnosed with moderate to severe autism.

In a short introduction to the performance, SAAS dance teacher Cindy Zhuang summed up the experience for the audience.

“It might be very simple movements, and maybe you can even do it yourself,” she told them. “But to these students, it’s one big notch up on their list.”

Ms Zhuang, a former freelance dance instructor who now teaches dance full-time at SAAS, knew right from the start that it was not going to be easy when her school was invited to collaborate with the dancers from Boon Lay Secondary.

But she went ahead, believing that her students would blossom.

“I was as frank as I can,” she said, recalling the first discussion she had with her counterparts from Boon Lay. “I told them that I’ve tried modern contemporary dance with my students, and it doesn’t work.”

“The one thing they cannot do is imagine,” she explained. “You cannot tell them that you want “soft arms”, because they will think, what do you mean by soft arms? My arms aren’t soft”.

The next barrier, she said, was communication and physical contact. The initial awkwardness of a first meeting was made even worse when she realised that the Boon Lay dancers were all girls, when the two schools had their first combined rehearsal.

“We went through the teenage phase, and you want a girl to touch a boy … and some of my boys are non-verbal,” she said.

“I saw awkward moments, like when they were asked to hold hands,” she said, chuckling. “Some of my boys were also not used to unfamiliar faces, and they started dashing around.”

But she is thankful for the support she got from her students’ parents, as well as the flexibility of her Boon Lay Secondary counterparts. One logistical issue they initially faced, she explained, was the difficulty in scheduling combined rehearsals for both schools, which are located at the opposite ends of Singapore.

“I was worried that my students would have meltdowns in the bus if it’s stuck in a jam during peak hour,” she said. “So I was so grateful when the Boon Lay teachers said they would come down to us instead.”

“Each time when the girls come, I always tell them that I cannot thank them enough. If there is another word greater than thank you, I would use it.”

Ms Zhuang also conducted a briefing for the Boon Lay students. She told them more about autism, and how each student is unique. Each student was also briefed on the traits and preferences of their individual partners.

“The girls took the feedback very well, and by the end of the next rehearsal, I could see they were much more confident.”

That confidence was also seen in 16-year-old Jovan Tan, one of Ms Zhuang’s dance students. He appears nervous, but has a ready smile for his friends and teachers. Strapped in the bus seat next to him is a Pokemon soft toy, which he says is his “lucky charm” for the combined rehearsal at the Esplanade that the students are en route to.

He once refused to dance unless Ms Zhuang played a special song about dinosaurs. But today, he moves with confidence on stage, easily linking hands with his partner, Boon Lay Secondary student Gabriella Roselyn, forming a bridge with his arms and swaying to the beat of the music.

Dance, says his older sister Tan Li Xuan, has done him a world of good.

“He wasn’t that verbal previously,” she said. “But now, he’s getting more talkative and will tell us what he did in school.”

“When he’s at home, he also sometimes plays songs on YouTube and just dances along to them.”

But beyond this, psychologists also point out the benefits students with autism get from regular interaction with their mainstream peers.

“Due to these challenges, children with autism may feel anxious in a social setting.”

“Being involved in the dance performance collaboration would also help improve their self-esteem, as they feel they are involved and contributing to the community,” she added.

Beyond this, principal consultant from the Autism Resource Centre Lam Chee Meng noted that going through the regular rehearsals can also build language and cognitive skills.

“These rehearsals can take a long time, and this helps them build their stamina,” he said. “That’s actually a very important work skill in later life.”

OPENING UP THEIR HEARTS AND MINDS

But the benefits of such collaborations do, in fact, cut both ways.

“The mainstream students learn to realise that people who may be imperfect can still be relied on, because they have strengths that we may not have,” explained Dr Lam. “I think it will help them with accepting, understanding and building respect for each other.”

And indeed, the transformation of the Boon Lay Secondary students over the course of the collaboration was evident, according to Siti Aishah Zahara, one of the teachers-in-charge for contemporary dance.

“When we first told the girls about the collaboration, they were open to the idea, but I could tell they were scared,” she said. “And when we went over to SAAS and met the students for the first time, I could literally see my girls curling up in their seats, which is really not like them.”

“Some of them also haven’t been exposed to students with autism before, because we don’t usually have them in mainstream schools,” she added.

“But they have opened up their hearts and minds to accept those who may be different from them. And who knows? Maybe they’ll be inspired to help out in such schools in future.”

She has lofty dreams for her students. But in the meantime, progress is charted in baby steps.

Jovan’s partner, Gabriella, beamed as she recalled how Jovan – whom she initially described as “a bit shy” – was eventually coaxed out of his shell.

“Some of the other students who are partnered up with my friends don’t really recognise them,” she said. “But every time, Jovan remembers me.”

“That makes me happy.”